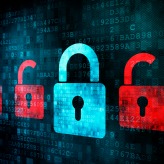 Some of the most well-known companies in the world have been victims of cyberattacks, including Sony Pictures, Home Depot, Adobe, and eBay. While major corporations are high-profile targets for hackers, small- and medium-sized businesses are not exempt, so they need to secure their networks and data. It may be difficult or impossible to undo any damage caused by cybercriminals, so it’s imperative for you to take certain steps to prevent it. Applying the following security tips can help guard your company’s data.

Using a complicated password to secure your system is no longer an effective way to solve the issue of cybersecurity. We tend to use that same complex password in our email accounts or bank accounts, and if one of your logins is compromised, this can result in grave consequences.

Two-factor authentication (2FA) adds an extra layer of security for your systems and accounts. It can be biometric verification for devices that you own, or a time-sensitive auto-generated code that is sent to your mobile phone. This security feature works in the same way websites would require you to confirm your email address. They want to make sure that you’re not a bot or anything else.

Encryption is a great obstruction to hackers, since it scrambles and descrambles data every time someone tries to read it. Encryption also causes compatibility issues if the data is not being accessed via the company’s own network systems. While applying encryption can be costly, it is certainly well worth the money if it can protect your business data from falling into the wrong hands.

Keep systems up to date

Technology is moving at a fast pace. Hackers are always upgrading their tools to take advantage of outdated security systems, so companies should do likewise to protect their valuable resources. Yet many companies don’t install software updates immediately. If the update closes existing security loopholes, delaying an update exposes you to external attacks. So install software updates as soon as they are released.

Although you’ve implemented several layers to your security, sometimes hackers can still find their way in. This is why you need to back up data frequently, whether it’s on-site, off-site, or by way of cloud backups. In the worst-case scenario where your systems do get infiltrated, you can restore lost data from those backups.

Many businesses have no idea how many computers they have, so it’s very hard to keep track of which computers are online. Sometimes a company’s computers and servers are online when they don’t need to be, making them tempting targets for attackers. It’s advisable to configure business servers properly, ensuring that only necessary machines are online and that they’re well-protected.

It’s much more expensive to recover from a data breach than to prevent one. If you’re looking to protect your business IT systems for potential threats, contact us today so we can help.