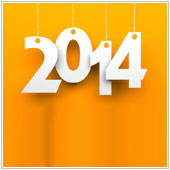 In 2013, mobile devices were once again the top tech gadget, largely due to Android. With many new high-end devices, two versions of Android, and new Google Nexus devices, it was a solid year for the world’s most popular mobile operating system. Now, all eyes are turning to 2014 and whether it will be an equally productive year of new developments.

1. Android beyond phones and tablets

We started to see this trend in the last quarter of 2013, with companies like Samsung introducing the Galaxy Gear smartwatch that syncs with your Samsung phone, and cameras that run the operating system. While the smartwatch wasn’t overly popular, the cameras that use Android are catching on. In fact, many companies, including Google, are developing other gadgets and devices for release in 2014 that will either run Android or sync with an Android device.

The other development to look out for could be the Google Glass. These wearable computers have been in testing by a select few users, and the consumer version is rumored to be due for release in 2014. It is possible that Google will mention or even officially introduce them at their annual I/O conference, or a special conference in the early summer.

The Nexus devices of 2013, Nexus 7 and 5, both came with the ability to charge wirelessly. If you purchase a small charging base – the Nexus Wireless Charger – that plugs into a wall socket, you can place the device on top of it and it will charge without having to be plugged in. We believe this will become a standard feature with most new devices released in 2014. The efficiency of this method of charging will likely increase, making it ever more viable.

3. A new version of Android

It is pretty much guaranteed that there will be a new version of Android in 2014. Most industry watchers believe that the next release will be version 5.0, an overhaul of Android. It’s hard to say what will be included in the next version, but the OS will likely see new features and even a new layout, perhaps one focused on making the system easier to use.

If the most recent release, Android 4.4, is any indication, it is likely that the version Google releases this year will also work on older devices, which could encourage manufacturers to upgrade devices to the newest version.

With the release of the Nexus 5 at the end of October 2013, Google showed that you can produce a high-end device at a mid-range price. There is a good chance that the big device manufacturers are working on similar devices that have powerful hardware and an affordable price tag. This is already evident with many carriers offering phones that are not high-end price-wise, yet have hardware that was considered bleeding edge last year.

5. Moving away from carrier-centric devices

Historically, mobile carriers around the world offered exclusive phones and went to great lengths to ensure other carriers didn’t get to utilize these devices. With the release of more Nexus devices and Google Play edition phones – phones bought from Google, not from your carrier – we are starting to see the same devices offered by most providers. This trend is likely to continue in 2014 and beyond, with the potential of users being able to pick their phone first and then their carrier, and not having to worry whether a specific mobile company will support their device or not.

The current nature of the Android market is that there is a wealth of devices running different versions of the system, which has led to a fairly fragmented market. You have devices released last year that are still running an almost two year old version of Android, which are not likely to be updated.

Google appears to be taking steps to encourage developers and manufacturers to update devices. The first step taken was to ensure that the latest version of Android can be supported by older devices. This should continue with future versions of the system, and should result in more devices being on the same version of Android. In other words, the market should become less fragmented. This will be good for business users who need to ensure that devices are secure. Instead of developing solutions for each version of Android, they can develop a strategy for just one version, used across the board.

2014 will be an interesting year for Android, so be sure to stay tuned to learn more. If you have a question about how this system can fit into your office, please contact us today for a chat.