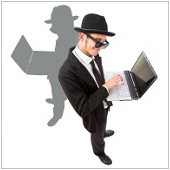 Statistics are showing that small and medium-sized businesses are being targeted by hackers on an escalating scale. The reason for this is smaller businesses tend to have lax and weak security, making them much easier and quicker to steal from.

In physics, there’s a concept called ‘the path of least resistance’. The meaning is plain enough – objects that move in a system take the path where they will encounter the least challenges and hurdles in order to quickly move to wherever they are going.

Apparently, the same principle applies to hackers nowadays. Instead of targeting larger firms for that big ‘score’, hackers are now considering it more feasible and much easier to victimize smaller firms and companies, even for a much smaller amount of money.

Why is that? First, smaller companies generally have much more vulnerable IT systems. Security is minimal or average at best, and the hackers don’t get as much heat or attention when compared to trying to breach the much more complicated, state-of-the-art security systems of bigger firms and businesses. Take a small newsstand business in Chicago: cyberthieves were able to install a Trojan in the cash registers which sent swiped credit card numbers to Russia. When the jig was discovered, Mastercard subsequently demanded an investigation – at the expense of the business owner – and the proprietor had to shell out a hefty $22,000.(i)

A survey in the United States reveals that more than half of small or medium-sized businesses believed that they ran no risk of being victimized by hackers, and less than half of the respondents had security systems in place.(ii) That looks like a path of least resistance, as far as hackers are concerned.

The loss of a few thousand bucks may not be much for a big business, but it can make a significant dent on the profits and sustainability of smaller organizations. And in the case of implanted viruses that steal credit card information, your reputation can also take a big hit. So if you want your business to stay truly safe before it’s too late, please contact us so we can discuss options and blueprints to make your business secure.