What’s better, virtualization or the cloud? 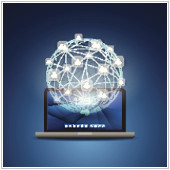 You’ve probably heard of cloud computing, but what about virtualization? Both are invaluable for small businesses, but it’s easy to mix them up. Learning the differences between these technologies can save you a lot of money, so let’s do a quick recap of how they work.

Differences between cloud computing and virtualization

Virtualization lets you reallocate hardware power using software. For example, many organizations virtualize an in-house server because if only 60% of a server’s computing power is needed to support the company email, it’s hard to make sure the other 40% is used efficiently.

With virtualization, you can create two virtual servers from one set of hardware. Each virtual server can be configured with just the right amount of memory and processing power for the needs of specific services such as email, data storage, and hosted telecommunications. Using IT more efficiently means you can put off buying new server hardware, save space in your office, and lower IT maintenance costs.

Cloud computing, on the other hand, is a method for delivering processing power. It allows you to access servers and other IT resources via the internet. For example, you could pay for access to a traditional cloud server (one set of hardware, one computer) or a virtualized cloud server. The main advantage of the cloud is that you can access your IT resources from anywhere with an internet connection.

A virtualization migration is relatively easy on end users since most of the upgrades are behind the scenes. Your employees may not even realize that your server has been virtualized. But adopting cloud technology means they will need to learn new apps, interfaces, logins, security practices, and a host of other new processes. Such a big change could hurt productivity.

Arguments for the cloud

If you’re willing to risk a short-term reduction in productivity in exchange for long-term independence from unpredictable hardware, cloud computing is a no-brainer. Other than a steep learning curve for your employees, the cloud is easier on your IT team and on your bottom line. Although some migrations, like moving from locally installed Office software to the cloud-based Office 365, won’t affect end users at all.

Which is the best choice for your business?

If you want to increase the efficiency of your existing IT hardware, make virtualization a top priority. If long-term growth and IT flexibility are more important, the steeper learning curve of cloud computing might be worth it.

One thing both technologies have in common is that they both need the unwavering support of trained professionals. Whether you’re virtualizing a server or upgrading to a cloud app, things like network security and data backups will need specialized care. Give us a call today to receive a special consultation.

Published with permission from TechAdvisory.org. Source.
Facebook
Twitter
LinkedIn
PrevPreviousWhat you should look for in a VoIP distributor
NextMobile security threats in AndroidNext