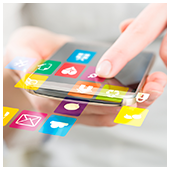 After months of teasing, Google has finally unveiled the next iteration of its mobile operating system: Android Oreo. Much like previous versions, users can expect faster delivery, smoother experiences, and plenty of cool new functionality. While Android Oreo is still in its beta phase, it already has a long lineup of features that users will love.

Picture-in-picture mode
First of all, picture-in-picture mode is now built into Android OS. This means you’ll be able to view YouTube videos or Skype calls in a shrunken window while another app runs in the background. Android users with larger devices will certainly appreciate the ability to multitask.

Enhanced notifications
Google is also introducing another small quality-of-life improvement for Android users with bubble pop-ups and notifications. When a colored circle appears on the top right corner of an app’s desktop icon, users can long-press the app to see more details about the notification without running the app itself. This saves time and battery life.

Longer battery life
Speaking of battery life, Android Oreo is also optimized to help your charged-up phone perform longer by limiting the power and memory consumption of apps running in the background. This leaves much more computing resources for active apps.

Intelligent copy and paste
For those who like to do work on their phones, Google is adding machine learning to the old-fashioned copy-and-paste function.

For example, whenever you highlight an email address, Android Oreo will provide you a link to Gmail so you can quickly compose a message. Meanwhile, long-pressing an address will automatically provide a link to your Google Maps.

Faster boot time
Another major upgrade involves faster boot times. According to Google, Oreo will be able to start up software twice as fast as Nougat. If true, users with older Android devices will definitely notice a difference.

Release date
Like most Android OSs, Google will be pushing out updates in waves starting in late August 2017. Users with a Google Pixel, Nexus 5X or a Nexus 6P will be the first to receive the update once it’s officially released.

Unfortunately, those who use devices from third-party manufacturers like Sony, Samsung, HTC, and Huawei will have to wait a bit longer.

How to get it early
If you have Nexus 5X, Nexus 6P, or any version of Google Pixel and can’t wait for the public release, you can always sign up to the Android beta program. Once you’ve enrolled, simply open your device settings, tap on About Device, and select Software Update to get a taste of Android Oreo.

Google will likely roll out more Android features in the next few months, so keep in touch with us to stay abreast of the latest updates.

Published with permission from TechAdvisory.org. Source.
Facebook
Twitter
LinkedIn
PrevPreviousContainers will soon be much easier to manage
NextThe values of Amazon AppStream 2.0Next