Virtualize your network with telecom giants 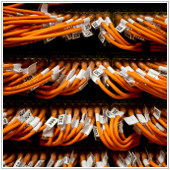 Although merely mentioning the word ‘virtualization’ has the power to make people’s eyes glaze over, its value and relevance can’t be denied. Since VMware first launched their workstation client in 1999, the industry has seen steady expansion and engulfed a number of legacy network solutions. Network virtualization isn’t entirely new, but Verizon and AT&T’s commitment to offering these services means they’re suddenly far more accessible for SMBs. We’re here to explain what that means.

The overarching theme of virtualization is combining hardware and software resources into one large, communal pool where individual servers and workstations can pull as much as they need, rather than allocating them inefficient individual puddles that either go dry, or unused. In a workstation model, this is realized in the form of minimally equipped endpoints that access much more powerful software and hardware resource pools via web browser.

When it comes to network virtualization, it’s quite similar to virtual private networks, or VPNs. Developments in cloud and software functionalities allow administrators to eliminate time-consuming and micromanaged VPNs while achieving the same swift and secure connections between servers, workstations, and other network-enabled devices residing in physically separate networks. VPNs are like pumps between each of your network ‘puddles,’ individual pieces that require individual maintenance. Network virtualization is like installing one pump with on/off switches on each outbound pipe.

This means that setting up a VPN for the addition of a satellite office is as simple as inputting a few simple pieces of information to gain a world of seemingly local network possibilities. In another example, rather than recabling your office when one department becomes too cumbersome to fit on one switch or hub, connections and protocols can be expanded and redefined by a software client.

With the increasing popularity of any service with the word ‘virtualized’ in it, telecom carriers Verizon and AT&T have begun offering this service to clients. Whether it’s because your business has a growing list of locations, or because your local network needs the flexibility to grow swiftly without waiting for costly hardware and software expansions, these services have you covered.

Both Verizon and AT&T will offer three ways to manage your virtualized network: locally, from the cloud, or a hybrid combination of the two. Once you’ve decided on a framework and deployment strategy, make sure to take time with the transition. Established networks are complex and messy ordeals, and it’s better to start migrating those puddles over time rather than all at once. Instead, move them one-by-one so any problems that arise can also be dealt with one-by-one.

Although consumer-level companies like AT&T and Verizon are offering this service, not just anyone can hop on and start getting the most out of a virtualized network. It takes expert configuration, deployment, and most importantly maintenance. With 24/7 coverage of your network, we eat, sleep, and breathe cutting-edge technology. Call us today and we’ll bring your SMB into the age of virtualization.