Proper use of the hashtag 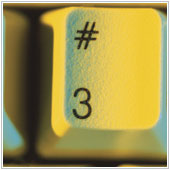 It’s a sure thing that when you say ‘social media’, the vast majority of people will think of either Facebook or Twitter. These are the largest two social media networks in use, and many users have accounts with both. Because of this, it’s not uncommon to see a trend develop on one network and expand to the other. One of the more common trends in use is the hashtag. But how many users know what the hashtag is really used for?

The hashtag (#), commonly referred to on telephone systems as the pound key, was first seen in use on the popular social network Twitter. According to the help forum on Twitter, “It is used to mark keywords or topics in a Tweet. It was created organically by Twitter users as a way to categorize messages.”

Look at nearly any Twitter message and there will usually be hashtags attached. For example, if you were to search for the term #Cloudbackup on Twitter, you would get a list of all tweets that have mentioned the above example. When Twitter talks about a ‘trending topic’ it means a subject that has become popular.

This way of categorization has become so popular amongst Twitter users that it’s starting to spill over onto the other networks. Instagram for instance has given members the ability to add hashtags to pictures, so that they can be added to groups which can subsequently be searched for. Even Google has gotten in on the act, with Google+ and YouTube both supporting this system.

On Facebook, the hashtag is used to give context to a status. You’ve probably seen some status updates such as: I love Mondays #sarcasm #bored. This should be read with a sarcastic and slightly bored tone.

Because of the usefulness of the hashtag, some users have become overzealous in their use. Reading a Tweet that says ‘#Friday is #awesome, here comes a #fun #weekend.’ just looks unprofessional and could put off followers.

While effective, there are some basic rules you should follow to help get the most out of your hashtags. Here’s four.

Hashtags, when used correctly, can be a great way to build brand identity and increase social media presence. If you are looking for a social media plan, please contact us today to see how we can #expandbrands.

Published with permission from TechAdvisory.org. Source.
Facebook
Twitter
LinkedIn
PrevPreviousDo you secure your private information?
Next5 reasons you need a continuity planNext