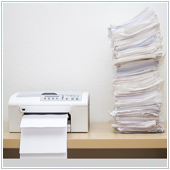 One of the biggest trends of the past few years is the rise of the tablet as a replacement for the personal computer, largely due to the success of the Apple iPad. The tablet has proven itself more than a fad, and is actually becoming an incredibly useful business tool. To extend its usefulness, Apple and app developers have integrated the ability to print documents directly from your iPad.

Here’s how you can print from your iPad.

AirPrint
AirPrint was introduced by Apple with the iOS 4.2 update. It allows apps on the iPad to wirelessly connect to a compatible printer. There are a large number of apps that support AirPrint, although there’s no official list. To find out if an app can print using AirPrint look at the app’s description in iTunes. There will be a note saying something along the lines of, “Wireless Printing supported” or “AirPrint supported.”

The only downside to AirPrint is that it will only work with a select few printers. A list of these can be found on the Apple website. For AirPrint to work, both your iPad and printer need to be connected to the same wireless network. If you meet the requirements, printing is quick and easy. Simply press the Action button (white square with an arrow) and select Print. The first time you do this, you’ll need to select the printer from the pop-up menu.

AirPrint enabler for Mac
If you have a wireless printer that isn’t compatible with AirPrint, don’t rush out and buy a new one as there are apps like Printopia that can allow you to wirelessly print. To do so, you need to download an app onto your Mac which then allows it to share its connected printers with your iPad. When the app is installed, you should be able to find your wireless printer. The only downside to this app is it only works on Mac computers with OS X version 10.6 and later.

Print using a PC
Don’t have a Mac? Don’t worry, you can still print using apps like PrintCentral. With this app you’ll be able to print directly to the vast majority of wireless printers, as long as they’re connected to the same network that your iPad is.

You can also print using a printer that’s connected to a computer. To do this, you’ll need to download and install the WePrint software onto your PC. Once this is done the software acts as a relay between the printer and your iPad, enabling you to print even if you’re not connected to the same network.

Being able to wirelessly print from your iPad helps make you and your business more efficient. If you’re working on the iPad during the commute, you can send it to the office printer and have it printed and ready for review for when you get to the office. This also makes you more efficient as you don’t need to log in to your computer, connect the iPad and transfer the information every time you want to print. You can just print it directly; saving you time.

If you’re looking for more ideas on how to integrate the iPad into your business, please contact us.

Published with permission from TechAdvisory.org. Source.
Facebook
Twitter
LinkedIn
PrevPreviousCheck for DNSChanger by July 8!
Next5 reasons why business tech is betterNext